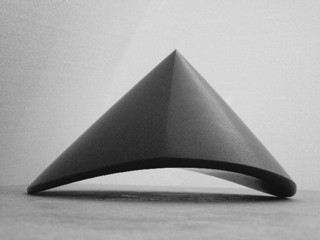 An Egyptian-Armenian sculptor heads back to Egypt to hold his first solo exhibition.

CONTRADICTORY ART would be a somewhat fitting title for Armen Agop's latest exhibition, which is nothing short of an experience in rhythmic motion and yet static composure generated by basalt objects that seem to fluctuate as you move from one piece to the next, some of them expressing uplifting emotions and some conveying depressing feelings.

The overall view of the black, revolving stone bodies arranged in the pale exhibition space is a head-spinning encounter which has the power to capture the curiosity of viewers.

Armen Agop's individual basalt and granite sculptures are fascinating; each oval or circular art piece has its own unique character; each is designed to lead the eyes, almost instinctively, to follow the object's lines and finally reach a certain point, giving the impression that they're searching for an exit from the composite stone bodies.

The series of lines and points play a pivotal role in these compositions. At times the lines are sharp, with aggressive cutting edges, whereas other pieces have more subtle, meek lines, that also seem to lead gently to a point. The points themselves differ on many occasions, varying from the minute and almost insignificant to other heightened, bolder ones. You can feel a sense of entrapment inside Armen Agop's twirling shapes, as your eyes involuntarily set out on a search for these points.

The pieces seem to have a life of their own. The first quick glances at them reveal only perfect, static bodies, each one being pulled inwards by its own inner forces, as if wishing to remain as compact as possible. But the reality is far from that. Some pieces display a glimpse of hope, a touch of curiosity about the happenings going on in the surrounding space. The ones that have sharp lines and boldly standing-out points have weak relationships with their own forms; They too are choked by the basalt and are seeking escape. The pieces with softer lines and points seem pleased with the way they are sitting comfortably with less curiosity regarding the outside world.

Not all of them are as mightily stable as they seem; a viewer, in curiosity, gently pushes one of the objects and observes as it rocks back and forth, hence discovering a more jovial side to the dancing bodies. The black granite pieces are arranged on square stands that are painted in white, accentuating the contrast of both the curved and sharp dark forms with the surroundings. It feels as though Agop had frozen certain volumes of space, thus creating these enticing bodies.

Despite the striking, unorthodox physical attributes of the objects with their inner and outer curves and sharp edges, they clearly yet somewhat surprisingly transmit Sufi transcendental suggestions to the audience.

Born in Egypt to an Armenian family in 1969, Agop's artistic creativity is strongly connected to his environment. The survival of ancient Egyptian heritage through time influenced him, in addition to the desire of the Armenian community as a minority in Egypt, in which he grew up, to continue and survive. It is not a coincidence that he works with basalt, which has a strong inner gravity, is compact and hard to work with as it stubbornly refuses to break apart. Very similar to the qualities of basalt are Agop's qualities as an artist and person.

Although Agop has been living in Europe for the past five years, where there's more focus on the instance of ex